A large, steel elephant could become the eye-catching centrepiece for the next phase of a ‘Fixing The Link’.

A planning application was submitted on 14 December 2018 for the installation of a steel sculpture on the Albert roundabout on Cowdray Avenue, along with a bespoke lighting, landscaping and improved CCTV.   Constructed using 26 individually designed pieces, it is hoped the work will become the eye-catching centrepiece for the next phase of the project to transform the walking route from Colchester Railway Station to Colchester Town Centre. Walkers will be rewarded as they walk towards the town centre by seeing the pieces merge to form the shape of an elephant.

This public art project aims to create a positive first impression of Colchester to rail users and encourage them, along with local residents and shoppers, to enjoy an improved walking route along North Station Road and Middleborough into the town centre via North Hill.

Public art consultancy, Dallas Pierce Quintero designed the steel structure to represent an elephant - the motif for the ‘Fixing The Link’ project, inspired by tales of Emperor Claudius’s dramatic arrival into Colchester with a herd of elephants to celebrate the victory of the Roman invasion in 43 AD.

If planning permission for the public sculpture is given, work will begin on its installation in spring 2019 and is expected to take around 4 weeks to complete. However there is not expected to be traffic disruption during the construction phase.

To view and comment on the full planning application

Plans for an iconic eye-catching steel elephant statue forming part of a major project to revitalise the route walkers take from Colchester Railway Station to the town centre have been given the green light.

The innovative project, which will see the wayfinding sculpture installed on the Albert roundabout, was agreed by Colchester Borough Council’s planning committee on 28 February.

The ambitious project, designed by architects Dallas-Pierce-Quintero, will see 26 individual designed steel pieces being used to create an impressive elephant statue. It is inspired by tales of Emperor Claudius’s dramatic arrival into Colchester with a herd of elephants to celebrate the victory of the Roman invasion in 43 AD. It will have a maximum height of 7.8 metres.

It forms part of the Fixing the Link project being undertaken by the council together with Essex County Council and Greater Anglia. The scheme is designed to create a positive first impression for people coming to Colchester by rail and encourage them to follow an improved walking route from the station to the town centre.

The committee heard the £200,000 scheme is being funded by all three partners and includes the installation of 52 LED lights which will illuminate the structure, enhanced CCTV and landscaping. It also heard that there had been no objections received regarding the planning aspects of the project.

The installation work is expected to start this May with completion due in June 2019­­­­­­­­­­­­­­­­. The work will involve a single lane closure of the roundabout and its approaches over two nights, therefore minimal traffic disruption is expected.

The roundabout will be cleared of trees and shrubs on Monday 11 March in preparation for the work to commence.

Fixing the link images and video 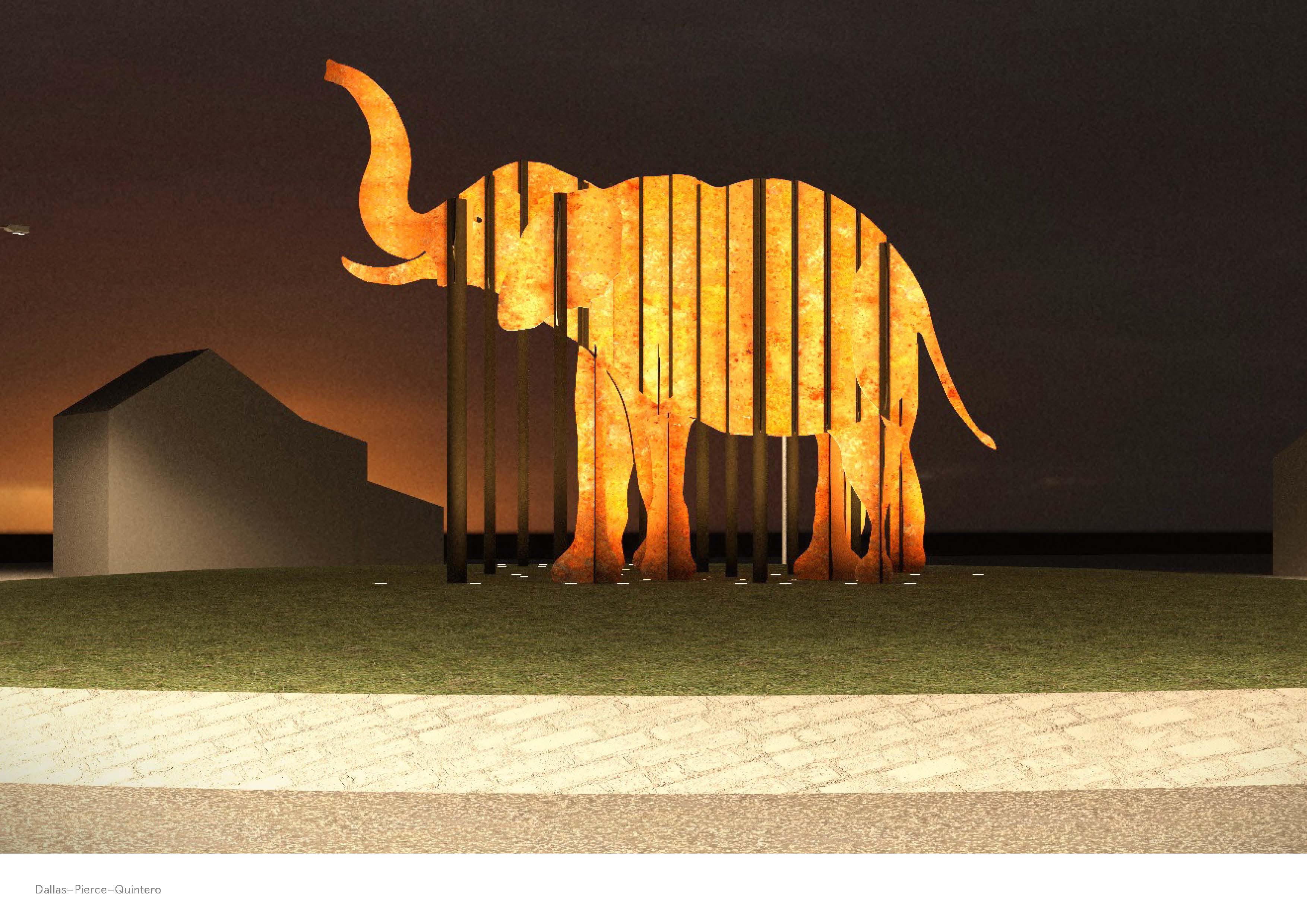 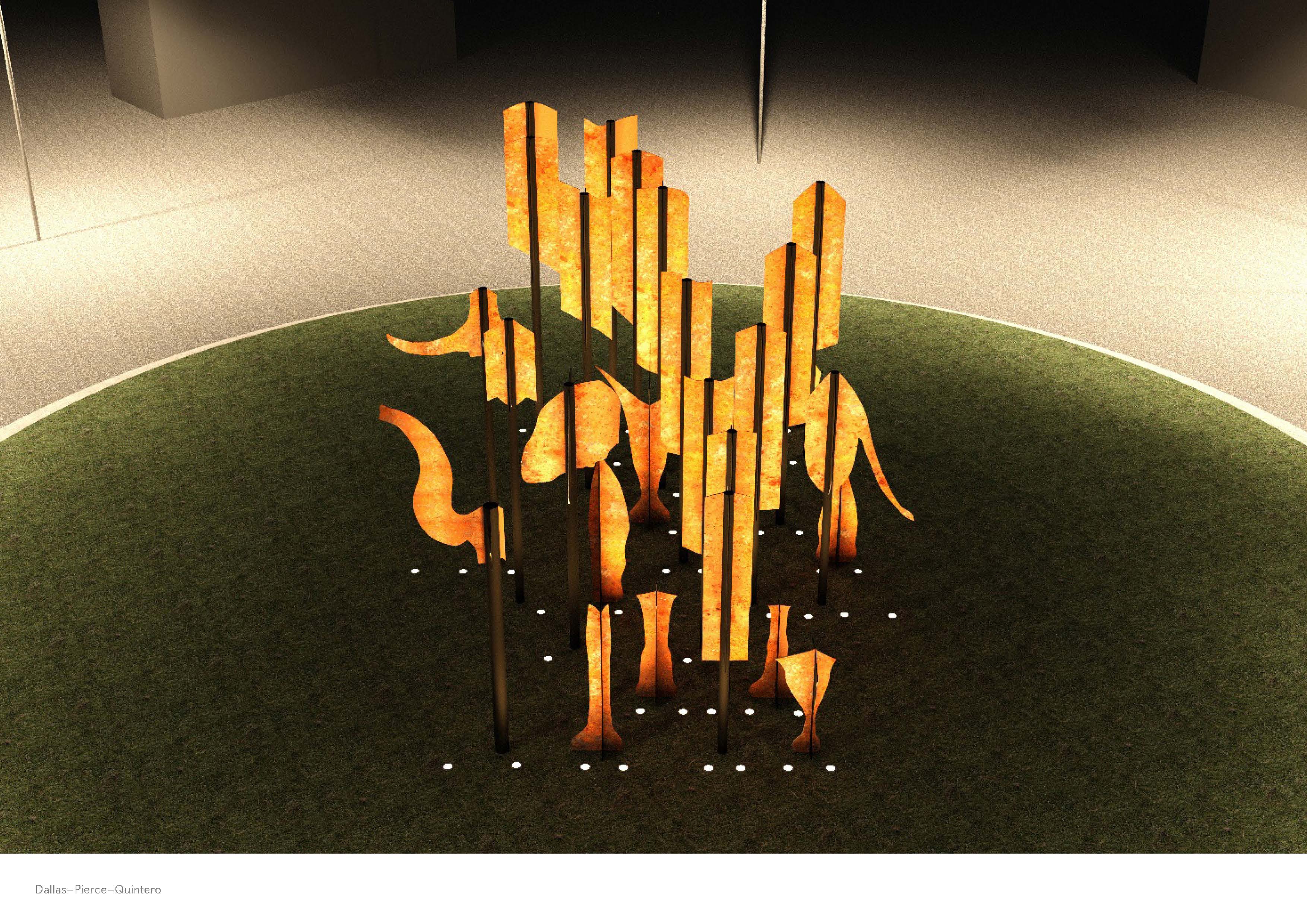 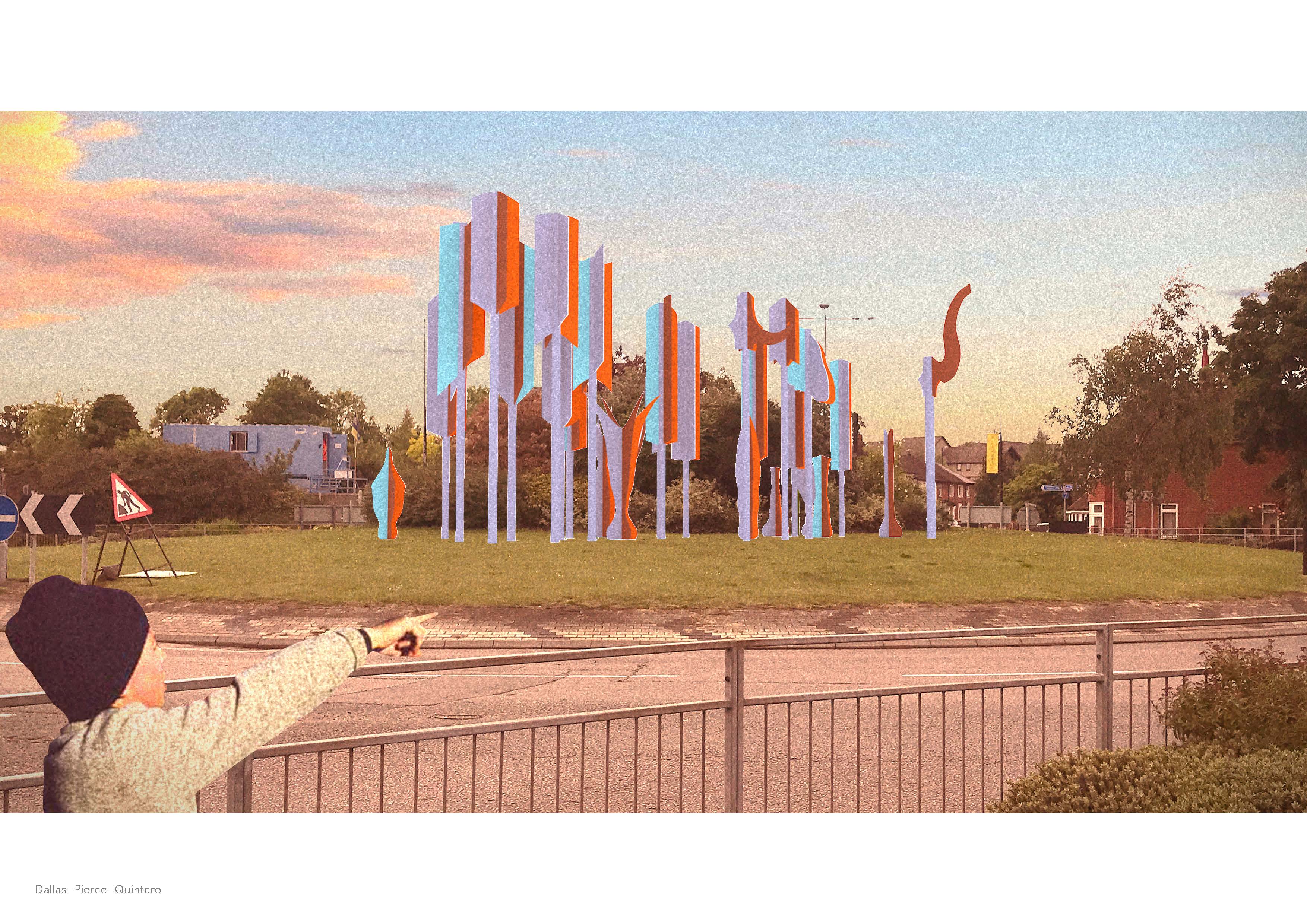 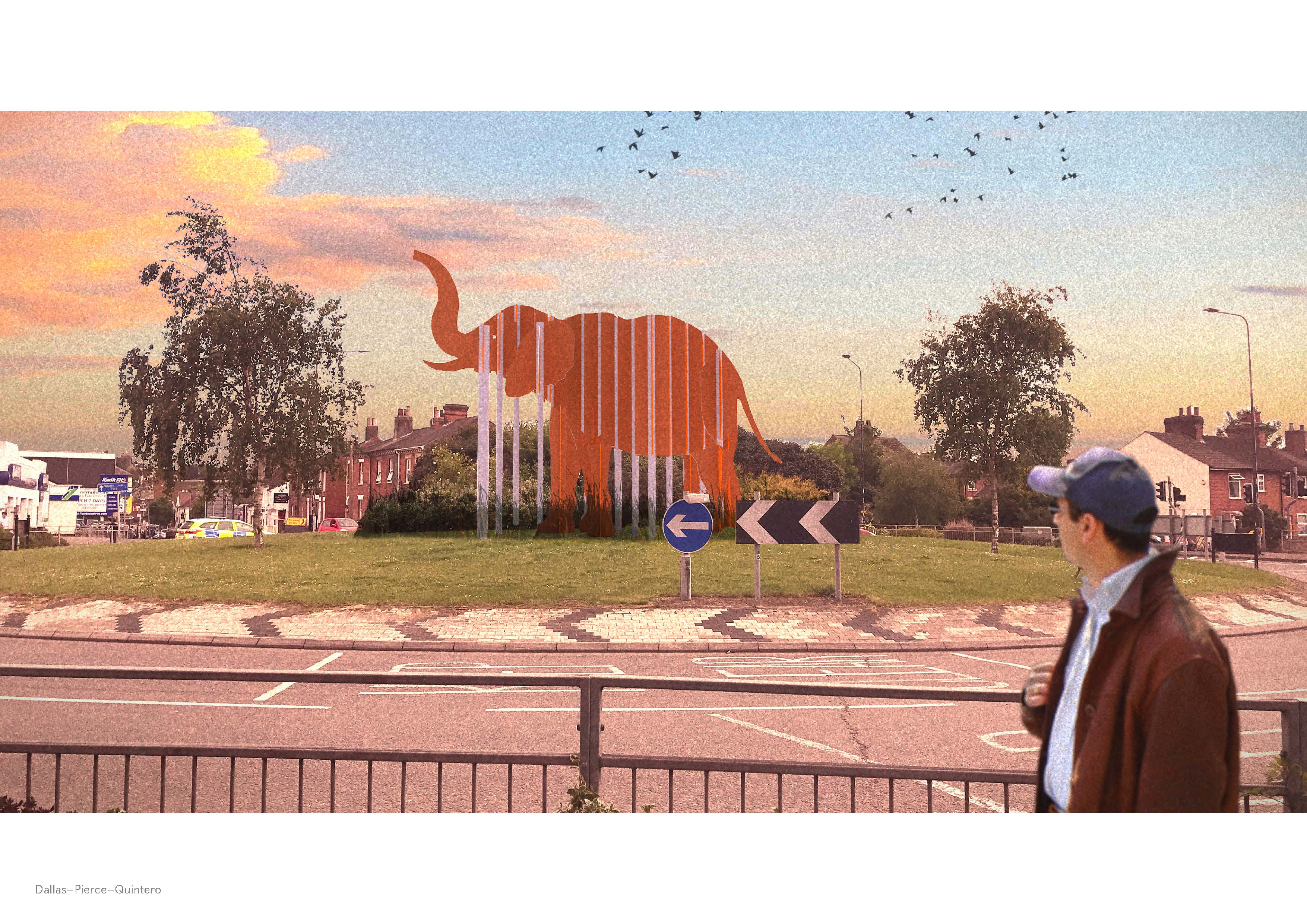 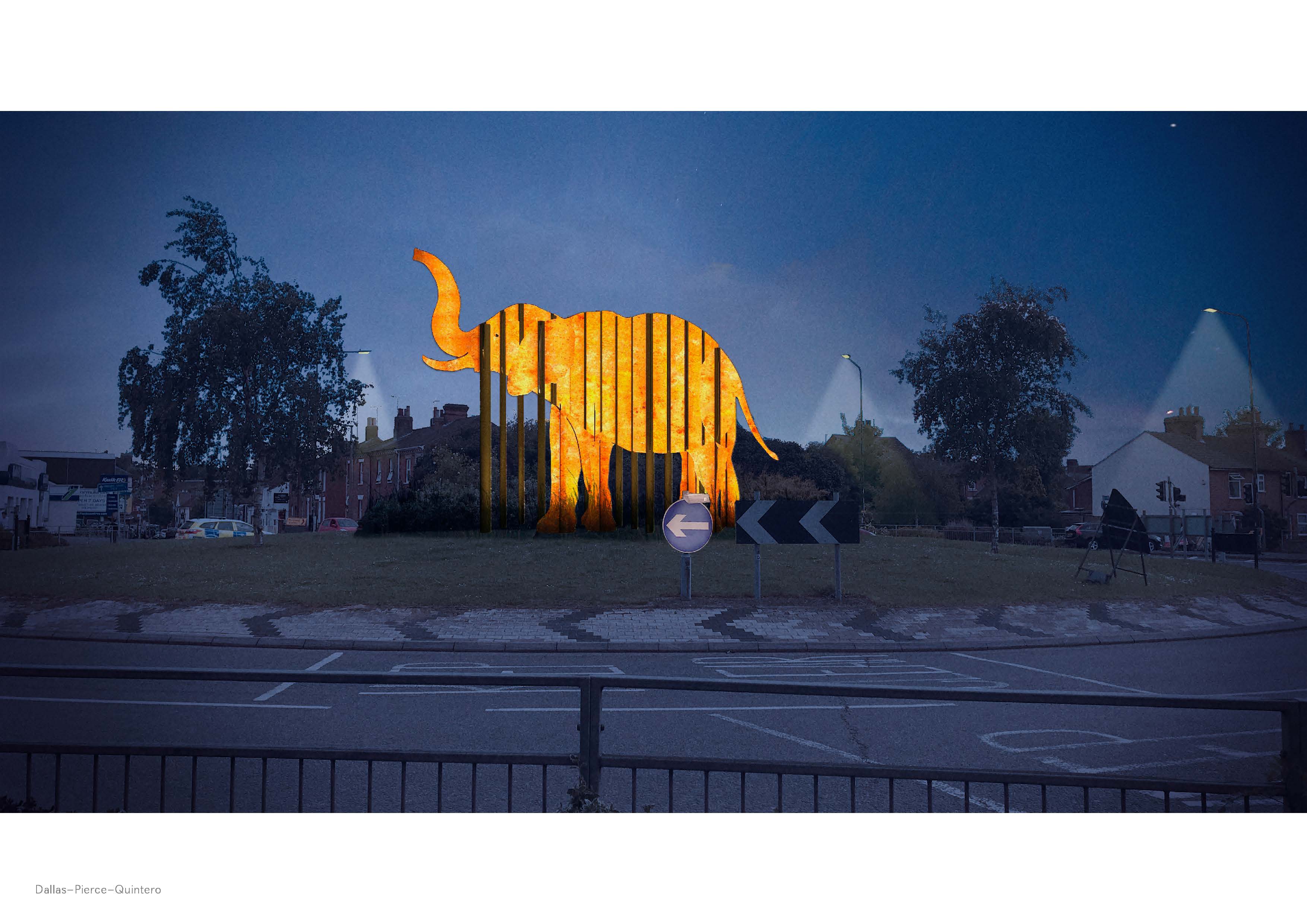 For most people every trip starts and ends on foot, and the best way to experience any town is by walking.
To help make the walking route into our town centre from Colchester Station clearer, Colchester Borough Council teamed up with Abelio Greater Anglia (AGA) and Essex County Council (ECC)  to create and install innovative artwork and wayfinding along the one-mile route.

The new wayfinding has created a welcoming and exciting impression of Colchester, encouraging more people to walk the one-mile route and visitors to stay longer and return again. It has also helped to improve the identity of the North Station Road area.

How to explore the trail

The walk from Colchester Railway Station to the town centre is one mile and will take you approximately 20 minutes. If you're starting at the railway station, simply find the large elephant sculpture on the south-side forecourt. Follow the yellow banners until you reach the two elephants on the High Street.
Download this map to make sure you spot all the points of interest marked along the way.
Follow Emperor Claudius in the modern day as he makes the one-mile journey from Colchester North Station to the centre of town - along the Fixing the Link walking route. A journey he made in AD43 when he arrived in Colchester with an invasion force that included elephants; the story that inspired the theme of the walking route.
Click here to watch the video of Emperor Claudius
On your journey you'll discover a series of route markers combined with information plaques, revealing historical points of interest along the routes. The walk crosses the River Colne, passes through the site where North Gate once stood, one of the six Roman gates in our town wall, and takes you past the landmark building, St Peter's Church.
Click here to watch the video of Colchester's Fixing the Link Walking Trail

Designers Dallas Pierce Quintero were commissioned to create a clearer walking route between Colchester Railway Station and the town centre, celebrating local history.
The designers were inspired by Colchester's historical and more modern links with elephants. From Roman Emperor Claudius' dramatic arrival into Colchester leading an invasion force that included elephants, to the iconic Victorian water tower at the top of the High Street affectionately known as Jumbo.

Where did the Fixing the Link idea come from?

We pioneered the use of a theory devised by Abellio Greater Anglia's parent company in the Netherlands, Nederlandse Spoorwegen, applying the idea to improve the experience of the walking route between Colchester Station and the town centre - called Fixing the Link.
This is the first time the Fixing the Link theory has been used in the UK, and we are proud that Colchester is the first pilot of its sort in the country.

Studies show that the better the link is between a train station and the town centre it serves, visitors stay longer and spend more which is good news for Colchester!

To keep up to date with this project