Colchester is currently defined as a 'high risk' coronavirus alert level. We continue to monitor the situation closely and will take action to minimise disruption and keep residents and visitors safe.

This year (2019/20) our Mayor is Councillor Nick Cope and his wife Mrs Elizabeth Cope is Mayoress.

Due to the coronavirus pandemic, Colchester Borough Council's Annual Meeting to appoint a new mayor in May 2020 could not be held.

Therefore, the current Mayor of Colchester, Councillor Nick Cope will remain in office until Autumn 2020 when it is expected that the new Deputy Mayor, Cllr Robert Davidson will be appointed as Mayor. 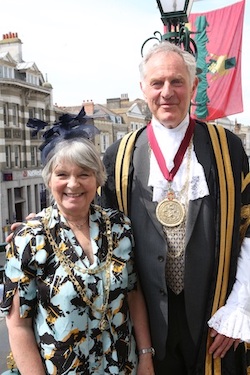 The Mayor's theme this year is "Young and Old" with the rider of building a healthy environment.

During his mayoralty the Mayor will be Patron of a number of groups/associations, (details available on request).

The Mayor sits as non-political chairman of the Council. As such, he/she is unable to get involved in any matter or complaints regarding council business or procedures. The mayoralty is customarily awarded to the most senior councillor of one of the political groups, who take in turn. The nomination is only rarely challenged. Before becoming Mayor, he or she serves for a year as Deputy Mayor.

The annual ceremony of the installation of a new Mayor takes place each May, following the Borough Council elections. The Mayor's election takes place at the first meeting of the newly formed Council.

The Council, officers and members of the public gather in the Moot Hall, to welcome the incoming Mayor who takes the oath administered by the Chief Executive.

The Town Serjeant places chains of office on the shoulders of the incoming Mayor and their consort. The new Mayor's speech of acceptance usually indicates a theme for the year, reflected in the choice of charities he or she intends to actively support.

Throughout their mayoralty, the Mayor also attends a number of engagements held by organisations within the borough. Invitations increase yearly, proof of the high value the office maintains within the community. Details of how to invite the Mayor to your event can be found here

The Civic Officer maintains the civic diary and regularly circulates the Mayor's engagements to the media.

The Mayor's Parlour is the Town Hall office where the Mayor works, as well as the reception suite for visitors. The Borough regalia is also displayed there and represents gifts to the town as well as items of the Borough's heritage.

Donate to the Mayor's charities