Colchester remembers the Battle of Arnhem 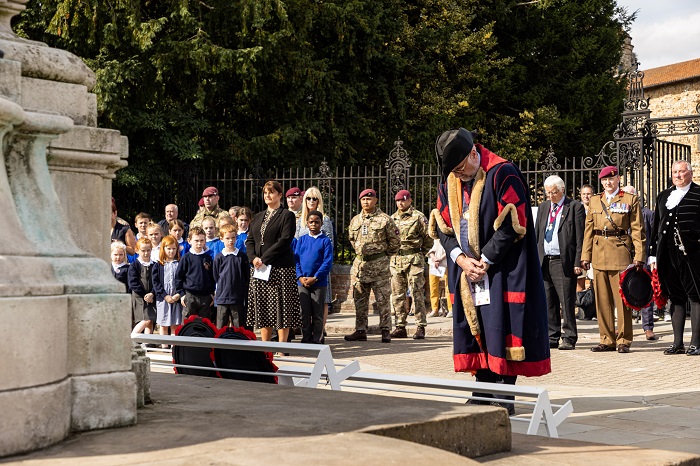 A service was held in Colchester earlier today (17 September) to honour the heroism and sacrifice of those who fought in the Battle of Arnhem and to recognise the borough’s relationship with the Dutch district where fighting took place 77 years ago.

Dignitaries, school children, soldiers and members of the public gathered at the town’s War Memorial, at 12.30pm, for the 20-minute ceremony led by the Deputy Mayor of Colchester Cllr Tim Young.

The Deputy Mayor was joined by the Deputy Lieutenant of Essex Lieutenant Colonel (Retired) Hugh Toler, Dutch defence attaché Lieutenant Colonel Richard Piso, and a small contingent of troops and senior officers from 16 Air Assault Brigade. Pupils from local primary schools and Colchester Institute laid sunflowers at the War Memorial, replicating what Dutch children do at the main commemoration service at Oosterbeek cemetery.

The Right Reverend Roger Morris, Bishop of Colchester, and The Reverend Joe Mairara CF, Colchester Garrison Chaplain, led prayers, and a bugler from The Band of The Royal Anglian Regiment played The Last Post and Reveille. A two-minute silence was followed by the laying of wreaths and the reading of the Kohima Epitaph.

The Battle of Arnhem was at the vanguard of Operation Market Garden, which was expected to break into Nazi Germany by a combined airborne and armoured advance, striking a decisive blow that would bring the war in Europe to an end by Christmas 1944. The 1st Airborne Division landed by parachute and gliders at Arnhem, on 17 September 1944, to capture the final bridge across the Rhine. Anticipating they would be relieved within 48 hours, the soldiers instead held out through nine days of prolonged and brutal street fighting before withdrawing across the river on 25th September. Over 1,600 British soldiers were killed at Arnhem and nearly 6,500 captured, while five Victoria Crosses were awarded.

The soldiers of 16 Air Assault Brigade, which is based at Colchester Garrison, serve under the same Pegasus emblem as the 1st Airborne Division, with the badge a reminder of the bravery and commitment of their forebears.

In 2019, Colchester Borough Council signed a bond of friendship with Renkum, the Dutch district, including the town of Oosterbeek, where soldiers landed and made their final stand, to mark their common relationship with the British Army’s airborne forces. The Dutch flag and Pegasus will fly from Colchester Town Hall from 17 to 25 September, to mark the nine days the battle lasted.

Speaking after the ceremony, the Deputy Mayor of Colchester, Cllr Tim Young, said: “We remember and give thanks, today, to those whose sacrifice during Operation Market Garden embodied selfless commitment to the cause of freedom

“I was tremendously honoured to represent the people of Colchester to pay tribute to the soldiers of the 1st Airborne Division, who fought against such overwhelming odds during one of the most intense and challenging battles of World War Two. We shall never forget their heroism in helping to defeat tyranny and secure the freedoms we all take for granted today.

“I would also like to thank, on behalf of the borough, members of 16 Air Assault Brigade, who recently returned from Afghanistan after two decades of service helping to improve the lives of millions in the region. They, too, showed unwavering commitment to freedom and human rights, and made immense sacrifices of their own.”

Colonel James Loudoun, Deputy Commander of 16 Air Assault Brigade, said: “Operation Market Garden was a hugely ambitious, if ultimately unsuccessful, operation and it is right that we should honour the bravery and sacrifice of all who took part.

“It is legendary within airborne forces and those who fought at Arnhem set a standard that we, as the current generation, aim to live up to.

“There are firm parallels that can be drawn between Market Garden and Operation Pitting, the evacuation of Kabul that the Brigade recently deployed on. While very different operations, both saw troops deploy by air to act with the determination, selflessness and compassion needed to deliver the mission on the ground.”