What have we been doing?

This is a case study from one of our referrals we received from Colchester Borough Homes Older Persons Services.
An elderly resident in Colchester had applied for sheltered accommodation as he said he was starting to struggle in his private rented property. The support worker dealing with his application was concerned that his health was being affected by his living conditions. An appointment was arranged to visit him to look at his housing conditions and to see if he required any further signposting for example, social befriending services, or the My Social Prescription Scheme through Community 360.
The gentleman had Chronic Obstructive Pulmonary Disease (COPD) and was relying on oxygen support 24/7, he suffered from severe arthritis and was living in a house within the poorest air quality area within Colchester.
The property was an original 1890's property, which had not been maintained or modernised and he had rented it for 40 years from a local landlord.
The windows were single glazed and cracked from the vibrations of the traffic on the street and lack of maintenance and the wooden frames were rotten and in poor disrepair.
The property had no heating source, except a small gas heater in the front room, which could not be used as it was a fire risk combined with his oxygen cylinders.
There wasn't any smoke detectors in the property and the Landlord's gas safety check certificate was out of date.
There was evidence of rising dampness and concerns around the condition of the electrical installation of the property. The kitchen facilities were inadequate and unhygienic due to plaster crumbling from the wall, lack of storage for food and the cooker was unsafe to use. These are legal responsibilities of a landlord, as they were not up to standard the landlord was breaching the legislation.
The tenant advised he could not leave the property due to his health and limited time the portable oxygen cylinders last.
He was currently strip washing in the kitchen as his arthritis meant he couldn't use the shower or bath as he found it very difficult to get in and out without putting himself at risk. He didn't have any family to help him or support him and spent all of his time alone.
After a formal inspection was carried out the following hazards were identified: Excess Cold, Food Safety, Damp and Mould, Electrical Hazards, Falling on stairs, Fire and Entry by Intruders.
These hazards were assessed using the Housing Health and Safety Rating System (HHSRS).
A full report of the inspection and the findings was sent to Colchester Borough Homes, his banding was re-evaluated and was increased to a band B from a band E. This refers to the priority ranking for allocating housing through the Gateway to Home Choice.
A referral to Occupational Therapy was made under urgent requirement and an assessment was carried out within a few weeks. The Occupational Therapist confirmed the property was unsuitable for the tenant to continue to occupy and this was added as evidence to his housing register application.
He was also provided with information on a local COPD support group that the project had recently made contact with.
An extensive schedule of works was sent to the landlord, this outlined all the works that had to be carried out to the property to bring it up to the required and legal rental standards.
The tenant was offered suitable alternative accommodation within six weeks of the inspection. The tenant now has a mobility scooter and is able to complete his shopping quicker than before and causing him less discomfort. He has become less socially isolated within his new property and spends time in the communal lounge and he is also able to wash comfortably in his new wet room.
The schedule of works explained the findings of the inspection, how to rectify them and that all works must be carried out before the property is re-let. Private Sector Housing continue to keep an eye on the property which remains vacant.
Although the Health and Housing Project does not focus on the re housing needs of individuals, in some instances like this it is the most appropriate solution. 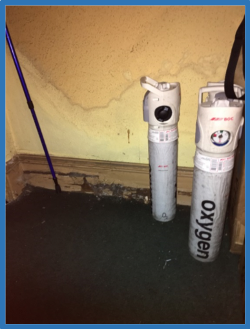