What have we been doing?

Here is one example that was referred by a Health Visitor using our standard form.
A private tenant and his wife were living in a 1980s three bed roomed house with their 4 young children, the eldest being 6 years old. The mother was reluctant to let the children out of her sight unless they were restricted to one room,  the youngest 2 being restrained in child seats.
The Health Visitor was concerned at the impact this level of restriction was having on the children and was advised by the parents that it was   down to the staircase being dangerous. The Health Visitor herself thought the staircase was a problem, she then remembered about our service and made a referral to the Health and Housing Project team. This was easily done.
She filled in the form, perhaps five minutes of her time, and e-mailed it to the secure address.
There was no guarding at all to one side of the staircase and not only were the horizontal banister rails to the landing easily climbable, the gaps between them could easily be fallen through by a child.
The landlord had been asked by the family to improve the safety of the staircase but he felt it was unnecessary as the design had not been changed since the property was built.
A professional assessment of the risks associated with that particular staircase was undertaken by the Health and Housing Project Officer. The risks associated with it were found to be such that the Local Authority had a duty to take action.
An appointment was made to meet the owner of the property on site and the dangers explained. He readily agreed to undertake all the works recommended.  Had he not been so amenable a Notice would have been served (the service alone
would have cost him £500) and the works would still be required.
Within one month of that meeting the staircase was improved.
The parents were absolutely delighted and very appreciative.  The mother is going to get a stairgate for the bottom of the flight and the   children will finally have more freedom to enjoy their home.
Dealing with housing defects is nothing new for a local authority.  But we can only deal with matters that are brought to our attention.  Hence we are asking you to make referrals, but only with your client's consent. 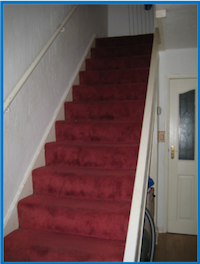 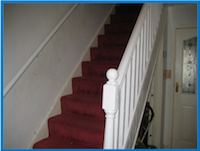